Into the Dark: Kong Lor Cave, Part I

Yesterday was our first day here in Khoun Kham village and we decided to set off for the main attraction, the Kong Lor caves.

We started the day with a quick noodle soup and after asking for some directions we set off. The cave was a 45 km drive away through some beautiful scenery. We zipped through flat rice paddies along dead straight roads, past wild buffalo, cows, chickens and loads of other wildlife crossing in front us.  The scene was quite beautiful. At the end of the paddy fields these massive karst mountains shot out of the ground. Locals were farming rice and tending to animals as we passed them in their conical straw hats.

After just under an hour we arrived at the entrance to the Kong Lor cave. We put our bikes on their kick stands, bought our tickets and met our tour guides, two locals from the Kong Lor village.

Now before I go on, let me tell you a few things about Kong Lor cave:

The cave is over 7 kilometers long, 30 meters wide and between 20 and 100 meters high. A few years ago the largest species of spider in the world was discovered there. The cave links Kong Lor and Natane villages, and this cave is the only way to get to Natane village, which lies in a hidden valley on the other side of the cave. Natane village only got electricity in 2011 and the tribe that lives there hasn't had much influence from the outside world.

As our guides were showing us down to our boats, I noticed one of them had a severe scar on his face, as if a large animal had attacked him. I mean seriously, like his cheek was missing on one side and you could see his teeth sticking out. Talia was not happy at my ‘joker’ reference…

We crossed the river, entered the cave and got into another boat inside the cave, where it became dark almost immediately. The ceiling was low and wide. It felt like we were being swallowed by some giant beast. We put on our headlights (which didn't do much; it was like a candle in a huge cathedral or a stadium) and the guides raced our boat through the cave, through bats, rapid water and god knows what else.

We got out of the boat onto a sandy beach inside the cave and walked along behind the guide in the darkness. We could hear water rushing in the distance and oddly loud drips of water closer by.

We stopped a couple of times along our walk to look at the stalagmites, stalactites and columns along the way, some of which were unbelievable. 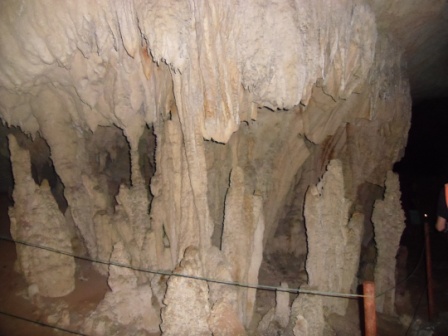 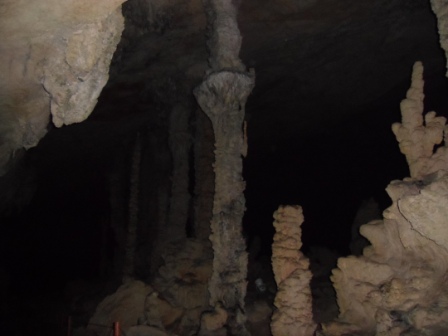 In the cave I decided to see the musical applications for these natural rock formations:

After a while we got back into the boat and continued on, speeding through the blackness. Eventually we saw some strong light as we rounded a corner and we realized that we were nearing the end. Just as we got the camera ready the boat started to hit some white water rapids, and I noticed the guide who was sitting behind me driving the boat had gotten out! 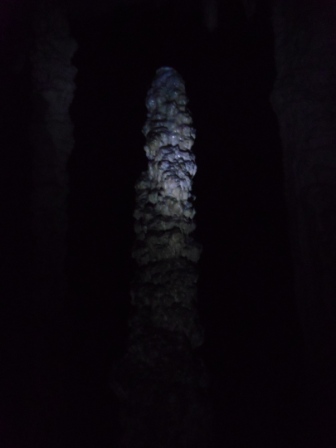 I looked around for the guides when I saw them at the front of the boat pulling us through the rapids. Once we had gotten through the rapids the guides got back in and drove us out of the mouth (or arse…) of the cave. The view was exceptional, with jungles, rapid water and towering mountains all around us.

Just then as we were puttering along the river the guide let out a yelp and pointed upwards, and I looked up, just in time  to see an eagle with its wings fully spread gliding right over our heads and land on a tree branch to our left. As I sat there in this little canoe I thought to myself “how could this get any better?!”