If you’re just joining us and haven’t read part one of the fantastic caves of Kong Lor, go and do that now.
I’ll wait.

Ok, welcome back.
After the eagle soared above our heads, we continued a little further upriver until we got out at a small ‘jetty’. It was basically a mound of dirt we had to climb to get out of the boat and onto the shore.

As we walked up onto the shore there was a small shack where some of the locals and some other guides were waiting. We dropped off our life jackets and started towards the Natane village. We walked along a dirt road and saw that we were clearly in a massive bowl shaped valley, filled with rice paddies all around and with tall karst rocks surrounding them. If any of you have ever seen the movie “The land before time” you’ll have a rough idea of where we were!

As we walked further we started to see some signs of life in the form of a few houses on stilts, dozens of chickens and ducks and children, all running around with limitless abandon. It was quite a sight! As we entered the town we realized that this was one of the most remote places we’d ever been.  We asked one of the locals if we could get some food somewhere and as it turned out he was a pleasant guy called Kane.

Unfortunately there was nothing to eat in this tiny tribal village (in hindsight I kinda feel like an idiot for asking) but Kane did lead us up a small ladder into an old woman’s house. The old lady was very pleasant and offered us a few beverages.

Next thing we knew we were sitting in this woman’s home with a sleeping baby swinging next to me in a basket, sipping a Beer Lao with this old lady, a Lao guy called Kane and little naked two year old running around us.

We sat there for a while and had broken conversations in whatever English Kane could speak, while I tried to teach this two year old how to touch his nose with his tongue.

Soon it was time to leave and catch our boat back through the cave. So we bid farewell to Kane, the old lady and the two year old, with his tongue firmly pushing towards his nose to the point where he was leaning his head back. We waded our way through the ducks and chickens, back down the dirt road and back onto the boat, satisfied with our visit to a Laotian tribe in a hidden valley behind a 7km underground abyss! 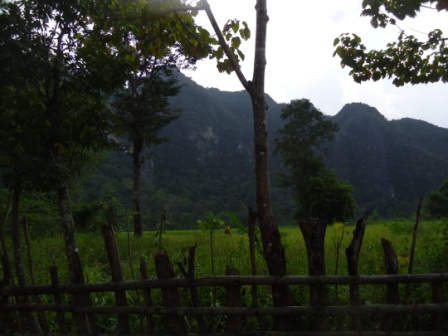 We got back onto the boat and headed back through this amazing cave, through more rapids (but downstream this time) getting splashed and dripped on until we came out the other side.

As we passed through the cave bats flew past us and in the blckness we could roughly see some clusters of sleeping bats, hanging in the dark corners of the cave. As we left the mouth of the cave, waiting for our eyes to adjust to the light, we thought how very much like a dream the whole experience was as we tried to recall the exact shade of darkness it was in the cave, but it was already escaping us.

What a day, we thought, and we hopped back on the bikes and started back for home. Just as some thunder clapped in the distance.

Yep, you guessed it.

Somehow we had managed to leave ourselves stranded 50 odd kilometers away from shelter in a thunder storm. But this wasn’t just a bit of drizzle. The rain came down hard and heavy, and as we drove through it the raindrops hit us with less of a splash and more of a bruising feeling. It was like heaven declared war on earth and opened fire with billions of bb guns. At some points I got a drop of water in my eye, and DAMN did it sting.

At one point we had enough and we pulled over under an unfinished stilted house on the side of the road, where we thought we could wait it out. Then the water started rising. We found some planks and put our kickstands and back wheels onto them so they wouldn’t get stuck. Meanwhile the water was rising up past our ankles!

We waited and waited for around an hour when the rain finally seemed like it had moved on and we continued down the road back to our hotel, but after a few minutes we had caught up with the rain again and despite trying to persevere for five minutes or so we couldn’t take it anymore and we pulled in to a small restaurant. Clothes soaked and dripping, with my face and neck sore from the raindrops, we stopped off and had ourselves another hot noodle soup along with some weird red meat on skewers (we didn’t ask what it was, and they didn’t answer).

Dried off and ready we headed back towards the village where our hotel was, passing herds of buffalo, chickens crossing the street (we didn’t ask why, and they didn’t answer) until we got home.

Our experience of the Kong Lor caves was amazing and we loved it.