Something Familiar, Something Foreign: 5 Months on the Road

A lot has happened in the past week.

One of the things that Ricky and I decided is a must for the trip is a motorbike tour of Vietnam. (We have Top Gear to thank for that.) We were in Chiang Mai for a little over a week and decided that Vietnam was our next stop. But how to get there? Flying seemed to be far too expensive, and we really wanted to do the trip without flying at all.

Then it hit us. Laos. We knew there was a bus from Vientiane to Hanoi, where we wanted to start the tour, and going by bus would be cheaper than flying.

So after a 14 hour mini-bus (like a 12 person van) ride, we are here in Vientiane. Yesterday, we decided that our first item of business would be to get our Vietnam visa. As we walked to the embassy, it struck me how much I liked Laos, and this city in particular. We walked the streets that were familiar to us, yet everything was also so foreign.

We had traveled the same roads before, knew where the too-large shopping mall was, and that the green walking man never showed his face signaling the time to cross the street on foot.

We still don't speak the language, though, or recognize a lot of places. It's still possible for us to get turned around on the side streets.

And that is great!

When you're at home, you sleep in the same bed every night, eat at the table that is always in the same place, leave your keys in the same little dish. Traveling, though, everything is different. Your bed changes often (sometimes more often than your underwear), and you hardly ever have time to have any favorites in a town.

So when we returned to Vientiane, where we stayed for a week two months ago, it was amazing to have the two sensations at once. We are staying in the same hostel we stayed at before, but in a different room with different people. We've eaten at a couple of the same places as before, and found some new ones too. It's a lot easier to branch out this time and try some new things, because we're not so wary. We feel confident in this town.

The same can be said for traveling in general. I was just telling Ricky how I felt like such a noob when we first started in China, and everyone we met had been traveling for a while. Now, though, it's different.

Today is our 5 month mark for the trip. We feel pretty experienced as travelers and are confident in the way we do things. We've made a ton of mistakes, but we've learned from them. Every new country or city we visit throws something new at us, but we are learning to handle them better after having messed up in similar situations before.

We are excited to go to Vietnam, excited for the challenges, the new experiences. We know that there will be things that are very different from what we've experienced so far, but we are confident that we will be able to handle them.

A Day at the Market

As I mentioned before, Ricky and I recently visited one of the largest markets in the world.  Now, we love to visit markets. There’s always so much to see that sometimes it can get pretty overwhelming.  This was our first market to visit in Thailand and it was a great first indeed.

Shops featuring handmade soaps and herbal balms offered fresh fruity and floral scents, while the pet section (puppies, kittens, birds, turtles, sugar gliders, and other exotic creatures) offered a scent not quite as fresh.  Clothing shops, purse shops, shops for toys and towels and amazing art filled the place. I was dizzy with the sights and sounds and smells of the market, loving every minute of it.

When I got hungry I snacked on a banana roti, glazed with sweetened condensed milk, and had a honey/lemon drink when I got a little parched.

We saw artists, hippies, lady-boys, beggars, and everything in between as we wandered the aisles.

I could go on and on about the wonders of the market, but instead, I’ll let the pictures speak for themselves… 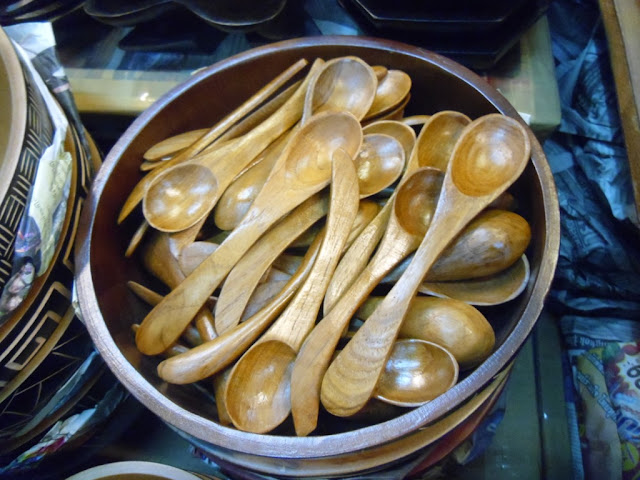 Luxury Items You Can't Travel Without

We were all kids once, so we know what it’s like to not be able to live without that special something. Some kids have blankies or teddy bears or dolls. Others had action figures or other little toys. I (Talia) had my little orange Tonka truck.

Thing is, though, that doesn’t stop when you get older. It just…changes. There are things that you can’t go without. When you travel, these things are usually considered luxury items, because honestly, you really don’t need that Tonka truck when traveling through Southeast Asia.

Ricky and I allowed ourselves one luxury item each, and no, our USB video game controllers for playing Mario Kart on the computer don’t count. For my item, I brought a pillow, which has saved me many a time on trains and buses when I really needed to sleep.  Ricky’s luxury item is a fly swatter because, as I have mentioned before, he hates the creepy-crawlies.   We both use our items frequently and are very glad that we brought them.

While we were in Otres Beach in Cambodia, we got to chatting to some other travelers and asked them what some of their luxury items. Their responses were quite interesting.

A couple of the girls we met said that they brought a bit of makeup, or a hair dryer, but one girl brought a “3-step facial care system.” Yes, three bottles of creams and lotions that she used every day. To her credit, she did have lovely skin.

Another girl brought a travel pillow—not one of the blow-up ones, but the real, stuffed, good quality kind. She didn’t have any room in her backpack for it, so wherever she goes, the pillow goes along, tied to the outside of her pack.

Guys were a bit different. A lot of them said they didn’t have any luxury items. One of them brought his own coozie (or beer condom or whatever it is that you call that foam thing that goes around a can to keep your drink cold).

Another friend of ours carried around his own insulated 64 oz Big-Gulp mug.

The point is, we all carry around things that we don’t need but that bring us that little bit of comfort when we’re away from home. So, what are some things that you can’t travel without? Or if you haven’t traveled yet, what do you think you would absolutely need to take with you?