The Day We Became Fugitives in a Foreign Country

Today started off as a normal day. I woke up quite late because I couldn’t sleep. Meanwhile, Ricky was on the bunk below me, giggling to himself while watching Top Gear.  At about noon, we got out of bed, had ourselves some cereal and prepared for the day.

Some of our plans fell through, so we decided to go for a little drive and see a couple of sights.  We headed toward a huge golden stupa in the distance, and as we neared, we saw that what separated it  from us was a massive empty parking lot, the kind you put a traveling carnival in. As soon as we scooted in past a mostly closed gate (which should have been our first sign), Ricky got a devious grin on his face.

We drove around the lot for a while until we came to one end and he challenged me.

“Naught to  fifty to naught.”

So we backed up to the curb, counted down and took off. Much to Ricky’s surprise I stayed right with him, and when I looked down I was nearly at 55 kmph and slammed on the brakes.  My tail snaked around me, but I stayed upright, much to my own surprise.

Well, it was so much fun that we decided to go again so we headed back to the start. Right behind us, however, were the coppers.

I smiled at them as they headed toward us, despite my fear that I was about to be arrested, because I heard that was the best defense mechanism for Lao police, and offered a cheerful “Sabaidee!” (hello)

They didn’t speak English, but sign-languaged their way into telling us that we can’t be here and that we have to leave. We apologized profusely, told them we would exit right away, and thanked them with a smile. Before we had put our helmets back on they had driven away.

We were pleasantly surprised, because we had heard some horror stories about foreigners being locked up or forced to pay outrageous amounts of money.

Well, our time would come…

Later in the evening we met a couple from Spain and an American girl they were traveling with. We sat and chatted for a while, then went off for dinner. After dinner, Ricky suggested that we burn some cash. Literally.

See, in China, they sell fake 100 RMB bills for people to burn in huge piles on the street. When they burn, the ashes and smoke go upward, toward the person’s ancestors in the afterlife. There, they will be rich.

Ricky had bought a stack of the money in China but we had never gotten around to burning it. So we got the money and headed down to the shores of the Mekong River to make an offering to our ancestors.

We sat in a circle, taking turns tossing bills into the small fire, as we said who each one was for. Grandmothers, grandfathers, great aunts, everybody. It was actually quite nice to take a moment and think of the ones we had lost. 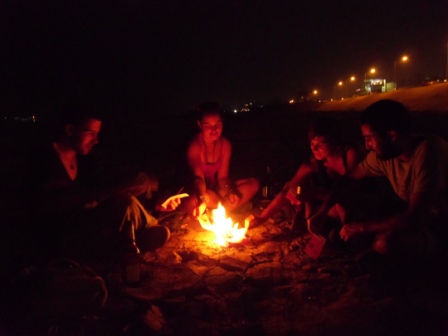 We had just burned the last bill and begun talking about how we felt (awww!) when trouble came.

The police came to bust up our party. There was one who seemed to be in charge, and a few lackeys.
The conversation went something like this.

Police: You, no here.

Us: Oh yes, mistake! We made a mistake, we can’t be here after 9! We’ll just be going now!

Us: No sir, we didn’t swim over from Thailand. See? We’re dry

Us: Sorry, we don’t have our passports with us.

Police: You, mistake, no here. Follow me, police station.

Police: You smoke (something no one understood)?

Police: Bag! (pointing at Ricky. He then proceeds to go through the contents of our backpack. He was
very suspicious of one pen.)

Police: You follow me police station. Give mistake money.

We began to walk away, ignoring a weak “Stop!”

We walked faster, feeling like fugitives escaping the law, and when we were brave enough to look behind us, we realized they weren't following us. We walked fast anyway and hurried through the marked and out the other side, back to our guesthouse where we caught our breath and thanked our ancestors for helping us out, which was nice, after all that money we sent them.

So now we’re here, safe in our tiny dorm room, with a cement floor and a window that looks out into the indoor stairwell,  basking in our fugitive glory.

The Lao police probably aren’t hunting for us, and that’s probably for the best, but being a fugitive for those couple of minutes today sure was exciting! 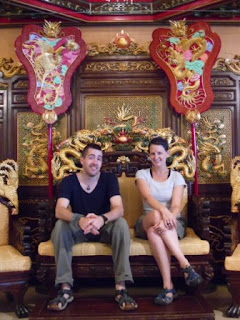