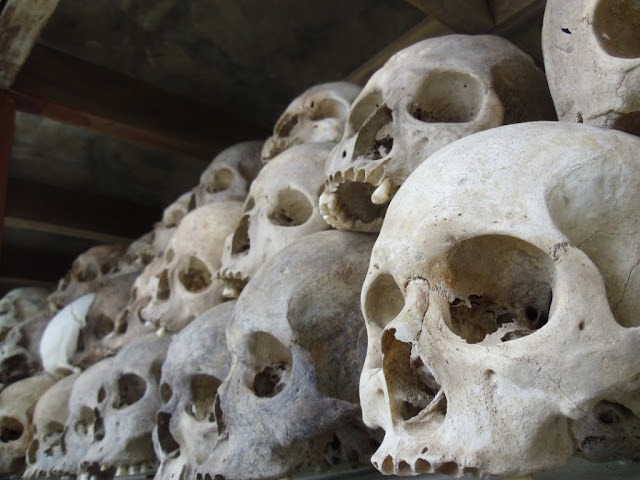 So yesterday Talia told about S-21, a school converted into a prison where the screams of innocent farmers and workers being interrogated, tortured and slaughtered can still be heard today through the palpable silence in the hallways and classrooms.

Well, the sad thing was that for most of the people who went to S-21, it didn’t end there.

Let me start by saying that words can’t do justice, and most certainly my small vocabulary won’t do justice, to how it feels to visit these places. Talia and I gave each other several looks throughout the two days immersed in genocide which almost converted into tears.

S-21 was a massacre, something humanity shouldn’t be able to create, but what came next was unspeakable. Today Talia and I visited the killing fields at Choeng Ek.

What are the killing fields? Well before today I thought they were small farms where people were often killed, but it’s a lot worse. The Killing fields is an area about two hectares in size, about a half hour from Phnom Penh. Before 1975 this was a cemetery for Chinese communities in Cambodia, but once the courtyard in S-21 filled with bodies stacked on top of each other, “Duch” ,The head of S-21, decided to start burying the bodies here.

The prisoners were stacked into trucks, blindfolded, and told by their executioners that they were being moved to a different facility or farm. Once the truck arrived at the killing fields the prisoners signed their names on a register, which was essentially their death warrant.

The prisoners were then lined up and marched to massive pits dug up to two meters deep. The prisoners were then forced to kneel down and wait while the soldiers of the Khmer Rouge bludgeoned them with rusting farm equipment found lying around, or cut their throats using the jagged bark of sugar palm trees or machetes. It really was the most gruesome scene imaginable.

Pol Pot, the leader of the Khmer Rouge, used slogans like “better to kill an innocent than to risk letting your enemy live” to spur on the murder that happened at Choeng Ek.

As we walked along the path through the memorial, we listened to our audio guide tell us about what we were looking at and what happened where and how.  At one point we stood next to a small fenced off area, and it took a very close look to see why it was fenced off. I got down on my hunkers and spotted some decaying teeth laying in the dirt. According to the audio guide every rainy season more and more bones and teeth get unearthed and surface all around the memorial.

On the east side of the complex there was a lake, the full length of the memorial. The guide told us that the lake had not been checked for human remains and the researchers that had worked on unearthing the corpses decided to leave the bodies in the lake so as not to disturb them. 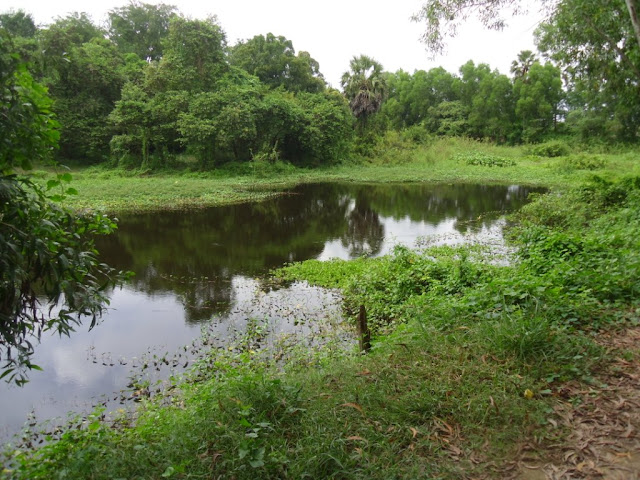 It was a desperate feeling to know there were corpses all around this place as I walked through. Every now and then I could see a tooth on the ground close by, or a bone jutting out of the earth or lying next to some rags.

Not all of the pits were filled with random people accused of being CIA or KGB agents. One pit filled with 166 bodies was found, with each body’s head removed. It was later discovered that these were Khmer Rouge soldiers who disobeyed commands or questioned authority. This certainly brought to light how the soldiers got the motivation to slaughter hundreds of people every day in such a seemingly carefree fashion. Next stop was a tree with a pit next to it.

This was the one I didn’t want to see and a part of me wishes I hadn’t.

When the Vietnamese came and removed the Khmer Rouge and found Choeng Ek, they saw this tree. The tree was covered in blood, skull fragments, chunks of brains and cloth. It took the Vietnamese soldiers some time to realize what had happened here. Khmer Rouge soldiers would tear babies and children from their mothers’ arms, grab the babies by the ankle, swing them around and smash their heads against this tree. Other soldiers would throw the babies in the air and try to catch them on their guns’ bayonets. The mothers were then stripped naked, bludgeoned to death and dumped into the pit next to the tree with the bodies of other mothers and babies. 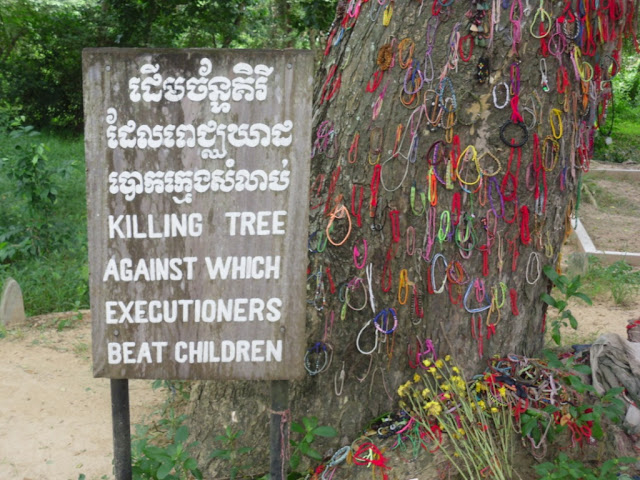 Why?
“When removing a weed one must also remove its roots” –Pol Pot.

At the height of the atrocities that happened at Choeng Ek, there were more prisoners being delivered daily than the executioners had time to kill; the executioners efficiently killed around 3oo per day. So a small hut was built on site to house the prisoners who would be killed after the executioners got some rest and could continue the following day. In order to hide the screams of the prisoners being slaughtered, a speaker system was hung in the centre of the compound blasting out songs about the Khmer Rouge regime. To power everything there was also a diesel generator and most likely the last few sounds that a prisoner would have heard before death would be communist party propaganda music and a generator going at painful volume levels.

Finally we entered the last building on the site, which was a memorial stupa. Inside it were housed the skulls, clothing and bones of the 20,000 odd people who were brought to Choeng Ek solely to die.

Our visits to S-21 and the killing fields have really brought a darkness to the capability of humanity in my mind. I never knew people could do these things and to me genocide was just a word. But after what I saw it has become a reality.
at November 02, 2012