I didn’t know what to expect from Phnom Penh but from stories I’ve heard and what I’d read in guidebooks etc. that  it was going to be a city of corrupt cops trying to get money from me, lots of thieves, scams, beggars and swindlers.

Unfortunately a large portion of that is actually true, but I’ll get back to that later. Phnom Penh has so much to offer as a city and though it’s always easy to focus on the negative, in Phnom Penh it’s so much easier to turn the negatives into positives. Taking an experience at face value can be much better and a more fun experience than weighing out options and reading between the lines, and our experiences in the city of Phnom Penh truly helped us see that despite the tragedy these people have seen, they live and thrive. They are lighthearted and cheerful, with a good sense of humor.

On a walk through the city, we passed an open area where tons of kids and teenagers were playing soccer. I of course had to join in. Meanwhile, Talia met and chatted with a local man and his adorable son.

Then, while sitting at a bar on the riverfront we were hounded at least once every two minutes by a beggar or a young child trying to sell us twine bracelets or counterfeit books. It really was non-stop! But once we actually engaged some of the kids and watched how the community of beggars and hawkers interact it all became quite an interesting encounter.

For example, when one 8 year old girl with incredible English asked Talia where she was from, and Talia replied America, the first words out of the girl’s mouth were “Ok, what’s up dog?” and then “Why aren’t you black?” Then, as she tried to sell scarves and t-shirts, we said we didn’t have any money. To that she had the philosophical reply of “No money, no honey, no baby!”

Following this girl, whose name was Pov,  was another small girl and a pantsless boy, walking like a boss down the street with a straw in his mouth, junk swinging from east to west. Pov explained that they were her niece and nephew, the children of her older sister who was also selling trinkets. She and Talia formed a weird sort of bond and ended up chasing each other up and down the street throwing chunks of ice at each other as other tourists looked on in either amusement or confusion.

While walking down the streets in the afternoon you can also quite likely see rats the size of terriers dead on the roadside but in a strange twisted way it all added to a beautiful charm in an indescribable way!

Another example of the city’s charm lies in the tuk-tuk drivers. A tuk-tuk can be a range of things from a trailer with seats towed by a motorbike to a van with no …”walls”. The tuk-tuk drivers will shout at random passers-by non-stop to try and get that important tourist dollar into their pockets, which can easily become very frustrating very quickly for the tourist.

To abate the annoyance, I made a sign that said “No! I do not want a tuk-tuk!”

It actually worked out really well! I didn’t have to say “no!” every ten seconds; all I had to do was hold up the sign and the tuk-tuk drivers would erupt in laughter! It was quite amazing to see their good humor at being refused.

In Phnom Penh a simple street encounter with a stranger can lead to anything from frustration to a huge laugh, from a hefty fine to a new friend. It really is a city of lightheartedness where we noticed laughing, playing children, and adult men indulging in a little horseplay  on the streets.

As we walked past the Palace of the late king of Cambodia we were approached by a group of kids on rollerblades and scooters selling postcards. As soon as I spotted the kids rolling down this four lane closed section of road I hi-jacked one of the scooters with the kid still on and rolled away at full speed! 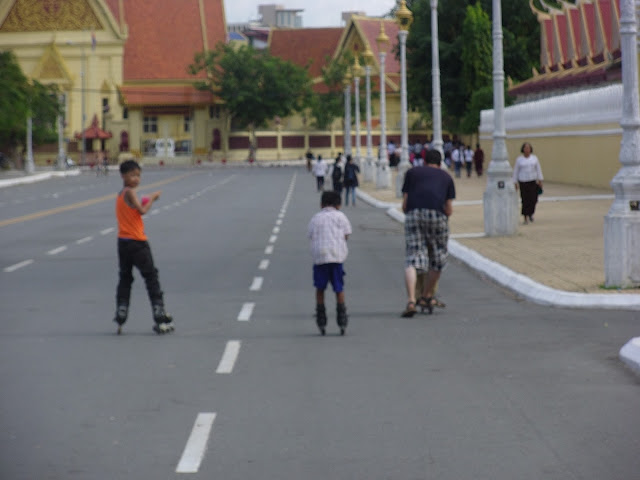 Inside a temple near the palace we ran and played with a different group of kids who were just running around and playing in their Sunday suits, paying their respects to the death of the king.

Phnom Penh really is a city where the worst imaginable atrocities have happened and from the ashes sprouted laughing children and locals. It’s a city where an honest smile is the most valued currency among the lower class, where strangers can laugh together in jest until tears come from their eyes.

I really liked Phnom Penh and apart from the traffic and that police man who tried to ‘fine’ us (all he got was an earful of F-bombs and some tire smoke) I would definitely like to visit again so I can remember the seven days I smiled like a fool.
at November 03, 2012