And now a joke from Twitter fan @Lets_WanderlustQ. Which ancient Roman had hay fever?A.  Julius Sneezer!

Laos is an interesting place. Most people have never heard of it, and those that have only know it from “Khan Souphanousanphone”  from King of the Hill.  To some, this country is known as “the tubing capital of the world”. The country is replete with swift rivers, and here in Vang Vieng tubing is apparently the thing to do. We overheard one tourist the other day say “If there wasn’t tubing here, this town would be nothing!” Well, we aren’t very big fans of tubing and the partying that goes hand in hand with it, but one thing we did find in Laos that we weren’t aware was a big deal is caves.

Since we came here we have visited a few caves and they are amazing. Today we returned to a local cave called the Phu Kham caves.  The first time we went in, we forgot to bring our trusty torches with us, and had to hire a crappy one from a local vendor, as you can see in this video:

Soon thereafter I saw a spider and ran out of there like a bat out of hell, a bat that was on fire and flying very quickly, after having seen a huge spider in a pitch black cave.

Today we went for a second visit with a group of Canadian friends we met nearby. Luckily the Canadians had a few torches (flashlights to you Americans, not the things that usually come with pitchforks on a witch hunt) with them, and we came prepared with our trusty headlamps our friend Matt bought for us (thanks Matt!).

We entered the cave and within minutes we found ourselves past the entrance, with it’s natural light coming through to shine on the golden Buddha in the center, and deep into the darkness, the same point that Talia and I had gotten to last time.

I have never gone caving before and it was actually quite scary and extremely dark. We had enough torches between us to have a good sense of where the sharp stalagmites and rocks were.

Half the time we were in complete darkness and got separated from members of our group,  or had to force our way through narrow pathways along cliff edges with steep drops. It was pretty exciting!  We had to wade through a small tunnel with water in it and climb slanted rocks with no footholds. At some points we had to backtrack to avoid falling into deep chasms.

We could hear sounds of water dripping somewhere around us, echoing  from what seemed like all around. We managed to make a full loop around the cave and re-emerged back where we had started after pushing our way through dark passages, water,  low ceilings and sharp rock.  We left the cave a little more scraped and wet and muddy than we were when we went in, but it was a really cool experience and very worth it.

I have to admit I really enjoyed our second outing and I would definitely like to do it again at some  point soon. In fact I know we will. There is one cave in central Laos which is 7km long in the pitch dark. We plan on visiting this cave on our journey. But another more permanent visitor to the cave is the world’s biggest (yes, the world’s biggest) spider. 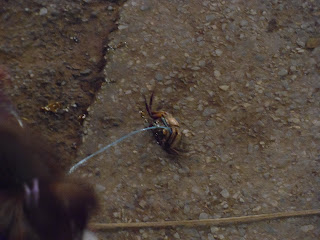 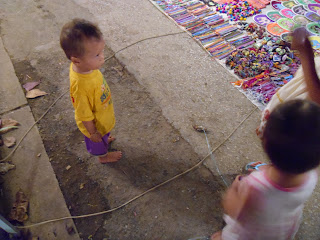 I should really be more careful!
at September 23, 2012 No comments:

A group of Americans was touring Ireland. One of the women in the group was a real downer, constantly complaining: “The bus seats are uncomfortable! The food is terrible! It’s too hot! It’s too cold! The accommodation is awful!”
Finally, the group arrived at the site of the famous Blarney Stone.
“Good luck will be following you all your days if you kiss the Blarney Stone,” the guide said. “Unfortunately, it is being cleaned today, so no one will be able to kiss it. Maybe we can come back tomorrow.”
“We can’t be here tomorrow!” the cantankerous woman shouted. “We have some other boring tour to go on, so we can’t kiss the stupid rock.”
“Well now,” the guide said with a smile,” it is said that if you kiss someone who has kissed the stone, you will have the same good fortune.”
“And I suppose you’ve kissed the stone,” the woman scoffed.
“No, miss,” the frustrated guide said.” But I’ve sat on it.”
at September 22, 2012 No comments: