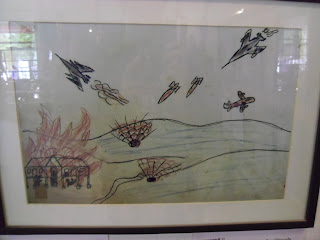 Most people don’t know much about Laos. Most people couldn’t point it out on a map, or even tell you which continent it’s on.

Well, let me tell you a little bit about it.

Laos is a small country in South East Asia. It borders China, Myanmar (Burma), Vietnam, Cambodia, and Thailand. And over the last thousand years, it has been invaded by each and every one of those countries, and other countries from the other side of the world.

The most recent of these wars that Laos has been involved in was the Vietnam war. Which doesn’t even make much sense when you think about it. How was Laos involved in the war between North and South Vietnam forces? During the Vietnam war Vietnamese troops made a series of routes called the Ho Chi Minh Trail through Laos, Cambodia and Vietnam to carry munitions to the troops around the country.

When the Americans found out about the Ho Chi Minh trail they instigated “the secret war”. The secret war was in the late 60’s and early 70’s when American bomber planes and fighter planes attacked areas of Laos that they believed were involved in helping the Vietnamese carry arms.

Here are some facts about the Secret War:

Here is a map of where some of the recorded bombing missions (of rice farming villages) in Laos occurred: 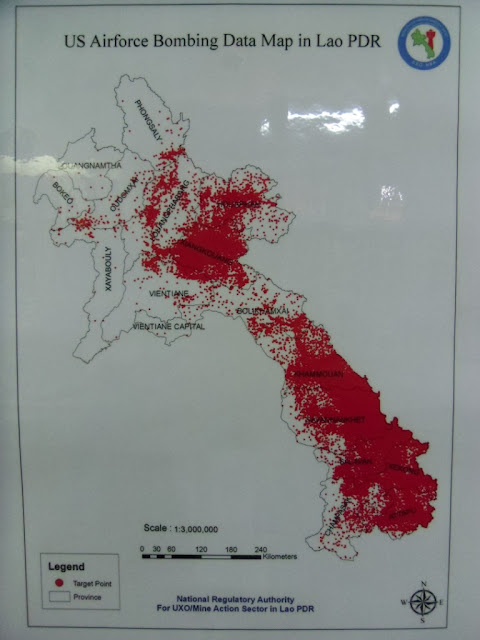 Talia and I have traveled all over this country. There are people in every village affected by the remains of the American Secret War on Laos. Every couple of days you see a person without hands, missing a leg or with a badly damaged face, due to farming for sustenance in an area that hasn’t been cleared of bombs dropped half a century ago.

Here are some accounts written by children in the refugee camps during the years of the bombings:

Cluster Bombs are designed to be dropped from a certain height, open in the air and drop a cache of apple or plum sized ‘bombies’ over a large area, each bombie giving around the same explosive force as a hand grenade.

The UXO situation wouldn’t be such a large problem if Laos were America or Ireland, where the economy allows for funds to be allocated to clearing land quickly to allow people to farm. And most people in Laos make such a meager living that sometimes farming alone doesn’t make enough income so the people of Laos have to find other sources of income.

Because of this a lot of Laotians turn to the scrap metal trade. A lot of adults and children go out into the countryside with spades and sticks to see if they can fish some of the casings from exploded bombs out of the ground, and sell the metal on the local markets. The people in Laos search fields, knowing there are unexploded bombs ready to explode, so they can have enough to feed their families,  or just to have some minor luxuries such as pots or pans.

Even today the United States use cluster bombs in areas of the middle east and as awful as it is to destroy a family’s livelihood (or even massacre entire villages with bombs dropped from drones controlled from hundreds of miles away) the land that cluster bombs are dropped on can remain unusable for decades, as we can see in Laos.

Check out part 2 of our article on cluster bombs when I tell you how people in Laos are living and COPEing with UXOs.
at December 11, 2012